Compliance comes in a number of forms. It can mean only using banners and landing pages that are deemed acceptable in the eyes of the traffic source.

In this case most traffic sources will have clear guidelines laid out for you in their help documentation.

You can often get away with being a bit naughty on traffic sources but some will catch you and respond harshly whereas others won’t care too much. Google and Facebook are well known for banning accounts when people do things even remotely grey.

Often people get banned from Google or Facebook with no apparent reason. They are very good at sniffing out affiliates and generally dislike the things affiliates try to do – even if you are running completely white-hat and brand safe came campaigns you may still trigger a ban!

When it comes to affiliate networks, compliance means only running advertising that has been approved or allowed by the advertiser.

The advertiser may permit only certain traffic sources or methods of traffic generation. They may also require creative approval.

As I mentioned earlier, creative approval is to ensure that no affiliate damages the brand or creates legal repercussions for the advertiser. You should be very careful with this. Much more careful than with traffic sources, at least those that you are not so concerned about losing.

It won’t matter so much if you get banned from LeadImpact. Being banned from Facebook would hurt more. But damaging the relationship between your affiliate network and a large advertiser will be even worse!

As an affiliate you are not anonymous or immune to these legal repercussions. So if you deliberately run something in non-compliant way and it has severe repercussions for the advertiser, they may legally pursue you.

As long as you read the terms associated with an offer, and talk to your affiliate manager if you are ever confused, you will be fine. You don’t have to be very experienced to know when you’re doing something that doesn’t seem right.

In this industry we tend to make a lot of banners, landing pages, and various creative content.

We have to source a lot of this content from the Internet from various sites. With the use Google image search, deviantART, stock image sites, or various other sources.

Firstly, be aware that if you didn’t take a picture, or someone else drew or made it, and you found and saved it from the internet, it is probably copyright infringement to use it. However in most cases, it won’t matter.

Affiliates are often pushing the boundaries, so a lot of people will use trademarked items to for example give landing pages a greater sense of authority.

There are situations in which you should be more careful about copyright and intellectual property.

Firstly avoid using celebrities – especially on high exposure traffic sources like Facebook. Celebrities have legal teams who will take much joy in sending out cease-and-desist requests to people who use their images.

Secondly, avoid using brand logos and trademarks – unless highly relevant to the campaign. Plastering the Coca-Cola logo on your ads for a gaming offer and saying “endorsed by Coca-Cola!” is a sure way to get you in some legal hot water.

This is also another important part of compliance. Advertisers definitely don’t want you using any intellectual property from competitors or simply other businesses, because it can get them in trouble. To another business, they don’t see ads as being from you – they see ads as being directly from the end advertiser and they are the one who will get the brunt of it.

Copyright law varies by country. For the most part it’s common sense. Trademarks, logos, brand imagery and so on are protected by copyright and if you use them without permission you might get a DMCA or C&D.

Play with this at your own risk.

In most countries that are signatories of the Berne Convention (which is most countries) IP in any artistic creation resides with the creator regardless of whether they put copyright notices on their work or not.

The “needing a copyright notice” thing is a myth – it makes no difference to any ensuing legal action.

Lastly be wary of where your images come from. If it’s a hot women who appeared in a Google search for “babes in Sweden” consider using a reverse image search to ensure she is not a celebrity.

There are several good examples for why you should check where your images come from.

The first was where someone ran a “date a soldier” campaign on Plenty of Fish (PoF). The campaign itself was fine, but unfortunately they just happened to use an image of a US soldier who was recently killed in Afghanistan, if memory serves.

The family of the fallen soldier actually spotted or was alerted to the ads and they sued PoF.

These were dark times.

Needless to say PoF later banned the use of soldiers and their images and ‘date a soldier’ type campaigns. Understandable.

The second involves someone advertising a dating offer on Facebook. I can’t remember the specifics but they probably Googled something about hot teenagers.

Unfortunately the image they used was of a (underage!) Canadian girl who had sadly lost her life a few weeks earlier and was all over the news. That was why her image came up in a Google search.

Whoever it was, they pulled the ad relatively quickly and disappeared into the night. I would have too.

How to get copyright-free images:

The first thing you can do is buy images from a stock image site. This is generally too expensive and stock photos typically perform like crap in ads, so I wouldn’t recommend this.

Alternatively on both Bing and Google, you can search for images that specifically have public domain usage rights.

On Google, do this:

On Bing, do this: 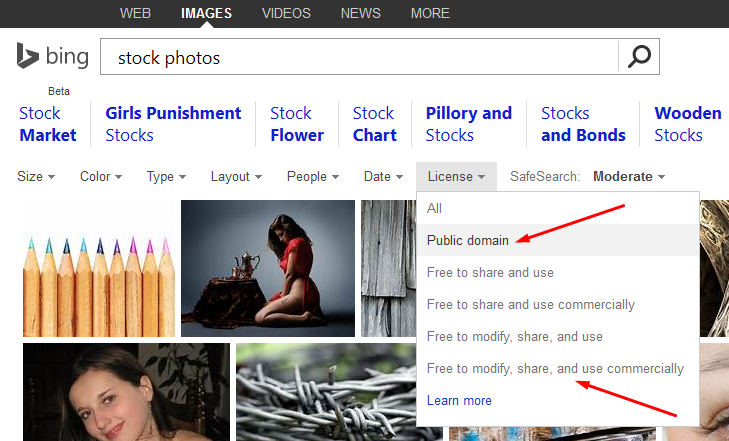 To access these options in Bing you may need to go to your search preferences > Worldwide > and switch your location to the US: 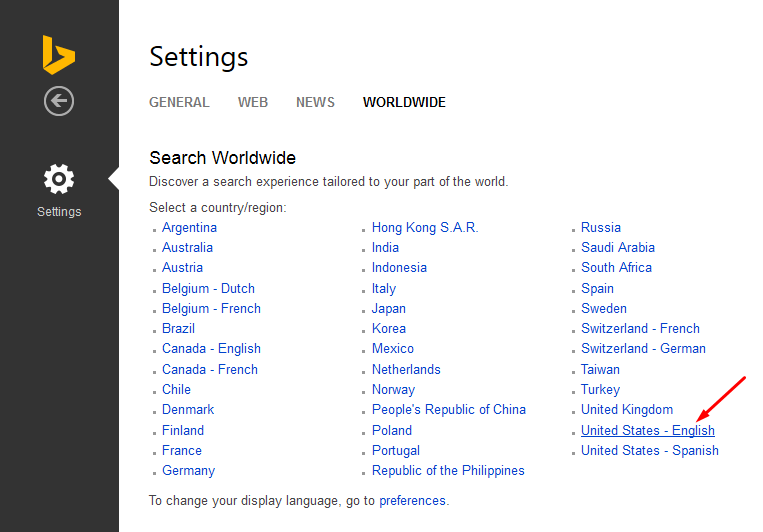 5. Laws and Legislation worth Knowing About

This is serious business!
http://en.wikipedia.org/wiki/CAN-SPAM_Act_of_2003

Actually, it is apparently not that well enforced. But, people have been sent to federal prison over it.

Basically, don’t send unsolicited emails. If you want to send people emails, you should get them to explicitly “opt-in” to your list.

Many autoresponder services for emailing also require opt-ins, some specifically through their system.

This is all about intellectual property, digital rights management, piracy and setting out obligations for middlemen like ISPs and web hosts.

If a company who owns the rights to some material finds it on the internet they can send a DMCA takedown request to the website, hosting provider, or other intermediary.

Funnily enough these do get abused by companies trying to damage/harass competitors – “Google asserted misuse of the DMCA in a filing concerning … …Takedown notices targeting a competing business made up over half (57%) of the notices Google has received, the company said, and more than one-third (37%), “were not valid copyright claims.””

If you use trademarked material you may get a DMCA. They are a slap on the wrist and little usually comes from them, you just take down the infringing material or your server host company does it directly.

Cease and Desists. These are slightly more serious than DMCA requests in that they usually come from a lawyer or legal team. Some companies have teams who are constantly searching for infringing content, they may even have automated bots doing it.

C&D’s are what the name says – a request to cease & desist some activity.

These can happen when you use trademarked material as well, e.g. plastering some companies logo on your pages.

You can either comply and respond with “I have complied”, comply and don’t respond, or just ignore it.

Many consider a C&D a rite of passage though it’s not really something to be proud of.

I’m sure you’re all familiar with carrier billing – both in the form of premium SMS messages that cost $1 a pop, or recurring billing e.g. $10/week.

How a user gets signed onto these depends – there are numerous ‘flows’ or submit methods.

In any case, the legislation on this is tightening up quite seriously.

Just recently I believe AT&T was fined for knowingly allowing such activity on their network wherein users were being deceived and AT&T was receiving a percentage of the billing fees.

Usually mobile PIN submit offers go wild in certain countries and then the legislation plays catch up > the bubble bursts.

The legislation around mobile activities is growing and is not something to mess with. If you do volume, you will want to know the laws about carrier billing for specific countries.

On a side note, the laws (and fines) around unsolicited SMS messages are enough to make you faint. Don’t do this.

This is a US federal law that aims to protect the privacy of children under the age of 13. Basically, it regulates the collection of information on young ones.

It’s not that applicable to affiliate marketing but you may encounter it if promoting games that appeal to children.

6. A Quick Note on Banking, Offshoring and Incorporation

Here on STM you’ll see quite a few discussions on banks to use, the best banking setups, the best place to offshore, and even the best type of business to incorporate as e.g. an LLC, S-Corop, etc.

When you are running volume the small percentages that you lose from transaction fees can amount to a lot. So it is sensible to move to banking accounts that minimise the amount you lose. For example if you are sending and receiving twenty wires per week, that could amount to $500-1000 in fees. Whereas a different bank or bank account may charge nothing for incoming wires, and allow for 30 free outgoing wires per week. All else being equal doesn’t it make sense to save $500 a week?

With volume it also becomes increasingly advantageous to use credit cards and payment mediums that offer substantial rewards e.g. airline miles, which add a percentage to your bottom line. Some credit cards even offer 2% cash back, though this may be taxable. With volume, every 0.x% counts.

Taxation laws also make it essentially mandatory to separate your business income completely from your personal life – and if you don’t want to deal with the venerable clusterf**k of accounting and bookkeeping issues.

Wherever you may be in the world, you should seek business/tax legal advice from a local authority. Don’t rely on someone on the forum. You need to talk to someone who has the qualifications to give you sound business advice for your specific country.

You can of course ask for advice here, but don’t pursue some business structure without getting legal advice. Besides being sensible, this also means that you have someone to blame if shit hits the fan and your local government doesn’t like your tax return structure.

Offshoring is the process of setting up a business entity outside of the country that you are in. Why would you do this? Because then the taxation laws that apply to the company are those from that country. This is why you get so called tax havens like the Canary Islands.

INTERESTED IN RECEIVING A CALL about DaniMaster'S Digital Marketing Services.